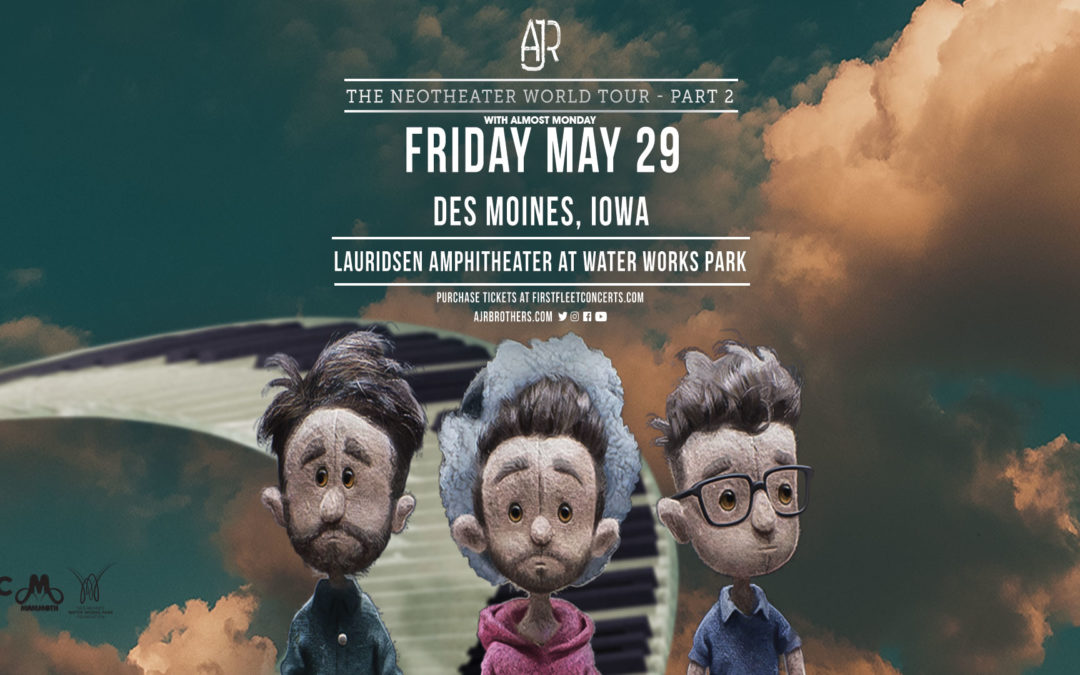 Unfortunately, AJR’s The Neotheater World Tour – Part 2 for Friday, May 31, 2020 at Lauridsen Amphitheater at Water Works Park has been canceled.

Since their 2013 independent debut  Living Room, the New York trio of brothers—Adam [bass, vocals], Jack [vocals, guitar], and Ryan [ukulele, piano, vocals]—quietly transformed into an international phenomenon. By 2019, the group earned RIAA platinum certifications for breakout singles “I’m Ready” and “Weak” and gold certifications for “Burn The House Down” and “Sober Up” [feat. Rivers Cuomo] as well as for their 2017 sophomore full-length  The Click  [AJR Productions/S-Curve/BMG]. Not to mention, they generated upwards of 1 billion streams worldwide and 120 million YouTube views for the latter in less than two years. The band also landed two songs, “Burn The House Down” and “Sober Up,” on  Billboard’s “Top 10 Alternative Songs of the Year.” Beyond selling over 100,000 tickets for the 2018  Click Tour, they graced the stages of festivals such as  Forecastle, Reading, Leeds, and  Bumbershoot  and have a busy Summer ahead at Bottlerock, Bonnaroo, Lollapalooza, and more. Plus, they garnered features from Time,  Nylon,  Paper, and Billboard  in addition to performing on  Jimmy Kimmel LIVE!,  Good Morning America  and  TODAY, to name a few.

Kicking off their next chapter, the 2019 single “100 Days” unfurls as another undeniable offbeat anthem. Underscored by an orchestral hum, slick bass, and heavenly horns, it slips from memories like, “Remember when we all got drunk, I ended up with two broke thumbs,”   into a handclap-driven hypnotic hook , “A hundred bad days made a hundred good stories. A hundred good stories make me interesting at parties.”  Sonically, you could liken it to Air and Weezer teaming up to score  Curb Your Enthusiasm…

They’ll most definitely have a few hundred more stories once their third full-length album, “Neotheater”, arrives as they continue to redefine, reshape, and reinvigorate alternative music.

San Diego-based band almost monday got their start playing self-booked shows in their hometown, soon drawing a rabid following on the strength of their larger-than-life energy, effortless charm, and sing-along-ready anthems. Since forming in 2015, best friends Cole Clisby (guitar), Dawson Daugherty (vocals), and Luke Fabry (bass) have gone from performing in the back room of a local surf shop to collaborating with Mark Needham (an engineer/mixer/producer known for his work with The Killers and Imagine Dragons). Signed to Hollywood Records in early 2019, the trio now introduce the world to their brand of alt-pop: irresistibly fun and impossibly feel-good, but full of genuine heart.

With each member now 21 years old, almost monday’s origins lie in the near-lifelong friendship between Dawson and Luke, who grew up playing music together. After crossing paths with Cole while surfing, the three multi-instrumentalists headed into the garage and started dreaming up songs with a distinct surf-rock feel. Once they’d built up a body of work, almost monday tracked down Mark Needham online and emailed him an invitation to an upcoming gig, a shot-in-the-dark move that ended up forging a close musical partnership. Soon enough, Needham connected the band with producer Simon Oscroft, who helped them create their first batch of recordings. During a D.I.Y. show at an airplane hangar less than a year later, almost monday caught the attention of Hollywood Records, and quickly scored their record deal.

Made with Needham and Oscroft, almost monday’s debut material artfully mines such influences as Coldplay, Oasis, The 1975, and Frank Ocean while revealing the many eclectic elements that inspired them to make music: Cole’s passion for punk (sparked in part by attending countless blink-182 and Foo Fighters shows as a kid), Luke’s longtime love of The Beatles, and Dawson’s childhood exposure to seminal alt-rock bands like U2 and The Smiths. almost monday instill each song with the same unstoppable joie de vivre they bring to their onstage performance. “At some point I started dancing really crazy at our shows, and I feel like it helps the whole crowd to put their guard down and let loose,” says Dawson. “That’s what we want for our music in general: to give everybody that feeling of dancing alone in your bedroom, where you’re not self-conscious at all — you just feel completely free to be yourself.”